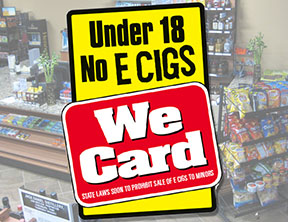 Well here we go again. Dr. Scott Gottlieb may be leaving the FDA, but he’s planning to leave one hell of a legacy for the vaping industry and convenience channel (or really all traditional retail outlets): days before he announced his resignation as commissioner of the FDA, Gottlieb submitted plans to the White House to move forward with banning flavored vaping products from non-age-restricted retail outlets, while allowing these products to be sold at vape shops, tobacco shops and even online.

This, according to Gottlieb and the like, will solve the youth vaping epidemic

If only it were so easy.

Allow me to indulge in a personal story that exemplifies the problem. The teenage son of a good friend was recently busted at his high school for selling a certain popular vaping device that I won’t bother to name. He wasn’t buying these at his local negligent convenience store, as the FDA would like you to believe. He sometimes bought online, but usually had an 18-year-old friend buy for him—why pay for shipping was his attitude.

When he got caught, he said to his parents “what’s the big deal? It’s not like I was selling marijuana…this isn’t even illegal.”

The FDA would be quick to remind me that my story is just an anecdote. And they can’t regulate off anecdotal evidence. But the agency’s own evidence (or lack thereof) supports this very notion. Here are four points I plan on including when I reach out to the White House and my Congressional representatives:

Youth usage—whether it be e-cigs, cigarettes, alcohol or drugs—is not an easy issue to address. It never has been. And I’m not a regulator: I don’t pretend to have the answer.

But the data shows that, while banning flavors from a huge chunk of the retail population may be an easy answer, it will not be an effective one. Which should concern all of us. Because at the end of the day, I do believe that the FDA is serious about wanting to solve the problem of youth usage. So when wiping out flavors at convenience stores doesn’t work, they’re going to look for another “easy” solution. And it won’t be good for any of us.

NACS encourages all parties to reach out to their representatives to ask the White House to stop the FDA’s assault on the convenience industry. More information on how to engage can be found here.